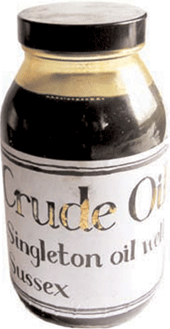 Oil is not represented by the equivalents of Naiads or Dryads or even King Coal, and yet oil has a personality; it is an agent in human affairs. It has a biography. This project re-imagines human history from the point of view of that oil-entity.

Conscious Oil is a cross-disciplinary exploration by three practitioners, a printmaker, a poet and a political writer, of the intricate relationship between history, language and the geosphere; through the locus of oil. The commercial use of crude oil and its derivatives has marked the surface of the earth as well as its climate and has led to conflict and environmental degradation on a gigantic scale. The sense of oil as an ancient part of nature, a rich metaphor, and the subject of folklore has been almost completely overlaid.

Our project, an installation of large prints, poetry and essays represents the multi-dimensionality of oil in its human, natural and archaic aspects. It investigates crude oil as a natural repository of the primordial past rather than a commodity to be exploited at all costs, part of a shift in consciousness which will increasingly mark humanity’s new relationship with nature.

The exhibition of prints and a pool of resources invites thought and debate. As a travelling show, we pull in local speakers, performers and responses, a selection of which is included in the Reflection section. If you would like to host this exhibition please contact us below.

Emily Johns is a printmaker who studied geography at Durham and immediately afterwards studied fine art at Goldsmiths because pictures seemed to be the right medium in which to think about geography. The show’s large scale lino-etchings, ‘What the Oil is Thinking’ has its political roots in almost 20 years of work on the war in Iraq, the Iran crisis and how geopolitics and oil have coagulated.

Anne Rouse is a poet who has had many residencies, including visiting fellowships in Glasgow and Belfast, and has published four books with Bloodaxe, including the collections ‘Sunset Grill’ (1993) and ‘Timing’ (1997) – both Poetry Book Society Recommendations.

Milan Rai is co-editor of ‘Peace News’ and author of several books including ‘Chomsky’s Politics’ and ‘War Plan Iraq’.